Today I found a picture from my trip to Norway some years ago and thought it might make a nice painting. It’s of a fjord not far from my Grandma’s house. In the corner there’s a glacier atop the mountain.

Here are the process pictures:

I’m still trying to get a handle on the medium of gouache. It’s interesting to work with it after painting with oils, which never seem to dry fast enough. With gouache, the paints start drying as soon as I put them on the palette! But I’m learning.

I also tried a technique called “limited pallet” where you only use a few colors for the whole painting. I heard it’s supposed to challenge you to mix more colors instead of using them right from the tube, and leads to a more cohesive painting. Overall I’m pretty happy with the way it turned out and I think in the future I’ll try an ultra-limited palette just to see what will happen!

So I just finished painting a birthday present for my dad:

Since his birthday is right around the corner and I didn’t really have enough time to buy him something nice, I ended up painting him a scene from our recent trip to Norway. XD I always end up waiting too long to get gifts.

Anyway, here’s the photo that I used as reference:

I’d never really painted with oils before, so some parts of the process were a bit difficult. I’ve been painting with acrylics for years, and one of the biggest differences between the two mediums is the drying time.

Acrylic, a water-based paint, can dry in a matter of minutes. Oil paint, on the other hand, can take one or more days to dry. This means that it’s easy to blend colors on the canvas, soften edges, and even rework previously done sections. However, this also causes some difficulty when trying to layer colors on top of one another.

Here is my painting process: 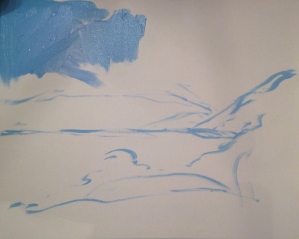 First I found a color for the sky and tested it out on the canvas. As I went along, I drew up a simple sketch using the blue paint. Some people do this with pencil or they create an “underpainting”. An underpainting is a monotone sketch in paint that people use to figure out values before filling in color. I didn’t have enough time to do this, so I just went right into painting the scene. 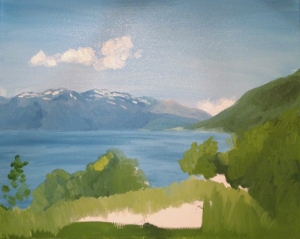 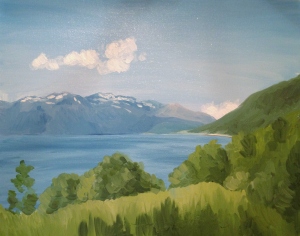 Then I filled in the water and mountains, using some of the blue paint I used for the sky. Getting the mountains the right color and shade was difficult, and I had to rework them several times. After they were finished, the rest of the painting process moved relatively fast. My method involves painting the scene from back to front. It’s generally easier to paint over the last layer than to try and paint around the one in front. 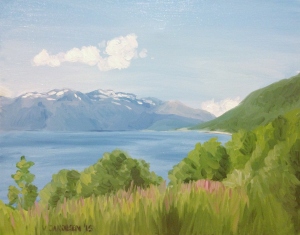 The final touches of the painting were the flowers. It was a little hard to layer the purple paint on top of the grass, since it kept mixing with the green. Eventually it worked out, though. 🙂

Overall, I’m pretty happy with the result. I have definitely grown fond of the soft look that oil paint has and am looking forward to experimenting with it again, even though it takes forever to clean up! Maybe I’ll paint my dad a Christmas present. XD

So I just arrived back home after my two-week trip to Norway. In a word, it was amazing.

For the most part, I stayed in a little cabin my family owns way up in northern Norway, in a town called Burfjord. Because it lies so far past the arctic circle, in the summer the sun doesn’t set. It’s a little hard getting used to going to sleep in daylight, but the breathtaking landscapes are well worth it. Armed with a camera, a journal, and watercolor paints, I was determined to try to capture them. 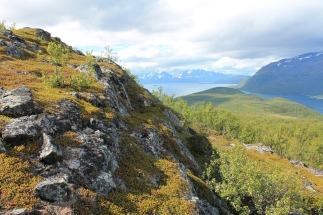 While in Norway, I started a little travel diary using ink and watercolor. It began as a way of keeping memories for myself that I’d remember more than just pictures. Now that I’ve created quite a few pages, though, I’m considering turning it into a project to share with others 🙂 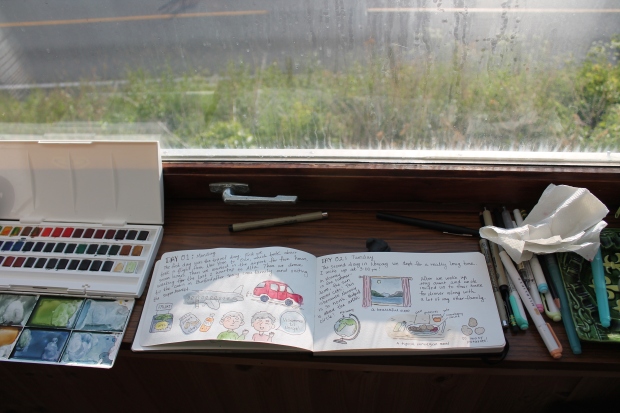 Here’s a few pages from my journal that explain how I arrived and a little of what I did when I got there: 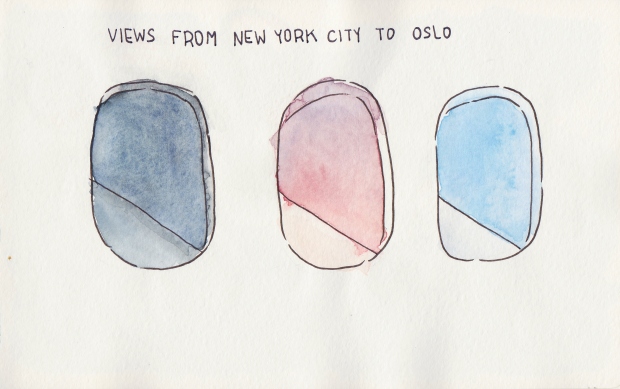 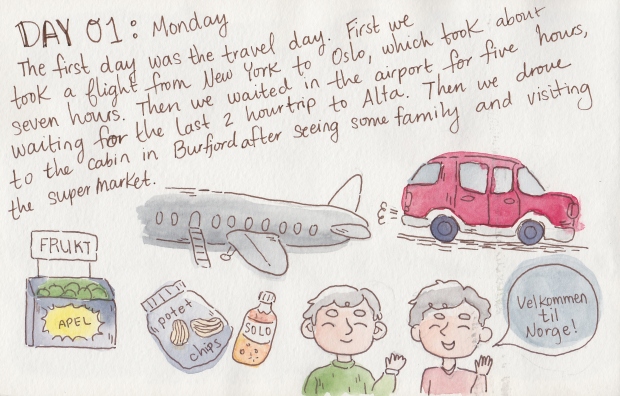 It was really fun painting with watercolors and trying to improve.

Overall, the experience was one of the best of my life. I had been to Norway a few times before, but I was so young that I hardly remembered it. I can already tell that I’ll remember this trip forever. 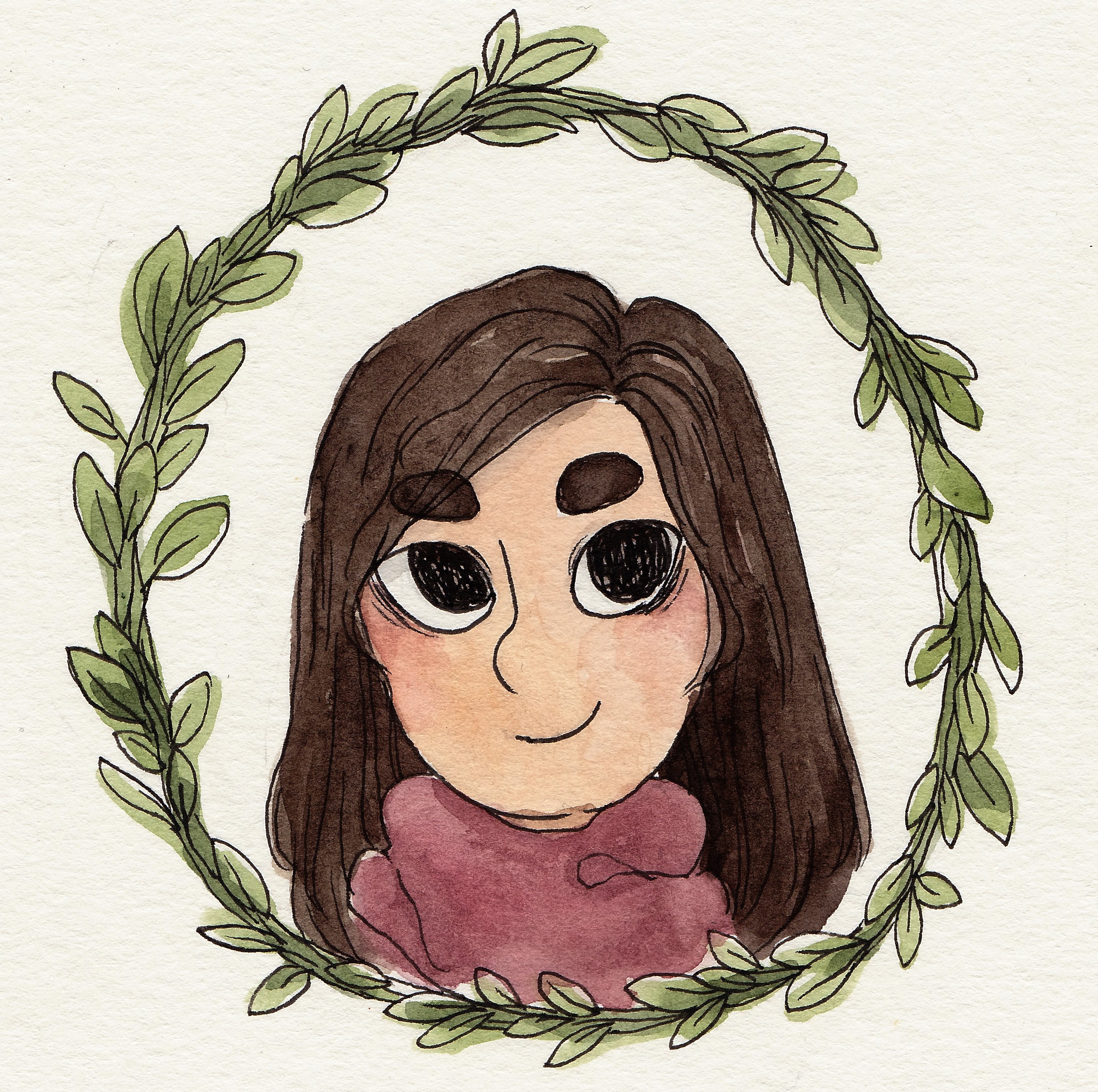 I'm an aspiring author and a lover of all things creative. I live for drawing and writing.

Little House on the Fjord

Winter House – a painting to start off the year

Writing Update #6: I finished my novel!